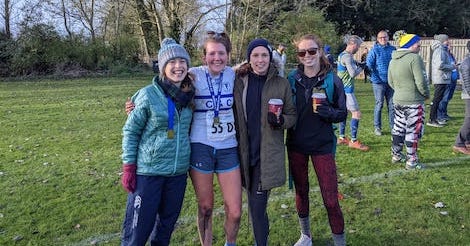 It was fantastic to have not just one but two all-ladies teams taking part in this year’s Hereward Relay – the C&C Speed Queens, who took home the 1st place crown, and the aptly named C&C Ladies, finishing 14th ladies team.

It was a gritty race for the C&C Speed Queens, featuring a whopping three stage wins, despite two members of the team taking a fall during their runs.

The as-always cool, calm and collected, Jessica Cocker got the team off to a cracking start, finishing 1st lady in stage 1 and position 14 overall. Jessica passed the ‘high five’ baton to Emily Benton, who stormed through a challenging second stage with lots of hard mud and some speedy stage 2 competitors. Emily passed onto Emily Paradis, who was the first of the ‘fall in the mud’ casualties. Not letting a pesky muddy corner get in her way, Emily scrambled up, carried on and eventually took the stage win and 15th place overall. When final stage runner, Joey Colley, set off there was one pesky Royston Runners lady just in front. Pressure was on. Determined to overtake and create a demoralising ‘you can’t catch me’ gap, Joey went off like a race horse – and then tried to cling on for the rest of the 10.9 mile leg. The second mud casualty happened half way along the stage, but, trying to forget her muddy, bloody knees, she carried on – the crown was in sight after all. Finally, the finish line came, Joey won the stage prize, placing 13th overall, and the C&C Speed Queens took the victory.

For the mens and mixed teams, a classic intra-club battle was promised and a flurry of late-night WhatsApps ensured we had replacement runners to cover some unfortunately ill and injured seasoned C&C speedsters…

The race started eventfully for the lead pack, with our team’s race starter Ollie in amongst it. A missed turn meant the leading 5 headed off-course, with C&C’s own Matt Slater (of fierce rivals the C&C Hillbillies) heading up the first-of-the-map-followers just behind but crucially and painfully just out of shouting distance. Ollie and most of the lead group backtracked to rejoin, finishing strongly with Matt taking the stage gold or silver (pending stewards inquiry) and presumed race lead for the C&C Hillbillies, Ollie taking 7th for C&C TeamZ, Matt Hickman taking 20th for C&C’s third mens team Trail Enders, and Rob Moir for C&C’s mixed team, Coffee & Cake Club, in 28th.

For our TeamZ, Iain Wood bravely came out of injury-induced hiding and held net position over the 11 miles of stage 2, also finishing 7th. Fergy was 30th on stage time for Hillbillies, Patrick in 48th for Trail Enders and Gabriele coming in 58th for the coffee squad.

On to last-minute recruit Sandy for the definitely-more-than-10.9-miles of stage 3 out of March, who had a good ding-dong with a couple of St Edmunds Pacers teams but lost one position to a speedy fella in a filthy yellow vest, as is the way. In a battle-of-the-Rogerses (apparently no relation…) Tom Rogers (Trail Enders) pipped Sandy Rogers (me, TeamZ) by 2mins on the stage, coming in 7th and 11th disrespectively 😉 Neil White was 22nd by time for the Hillbillies with Ben Chamberlain in 49th.

At this point the brutal TeamZ vs. Hillbillies battle was looking good (depending on your point of view) with TeamZ in (I believe) 8th place and the Hillbillies a few minutes behind.

On to Sullivan for the final stage into Ely, for TeamZ, running a blistering stage-winning effort over a minute clear of the aforementioned yellow-vested folk’s runner. Seven was the number of the day with Rob Mahen running the 7th fastest stage 4 time for the Hillbillies. Andrew Brett was 15th for Trail Enders and Romane brought the Coffee & Cake team home with the 72nd fastest time on stage.

Once the stage 1 mishaps were accounted for, TeamZ finished in 3rd place; with the Hillbillies in – you guessed it – 7th, Trail Enders in 19th and Coffee & Cake in 51st of the 90 finishing teams.