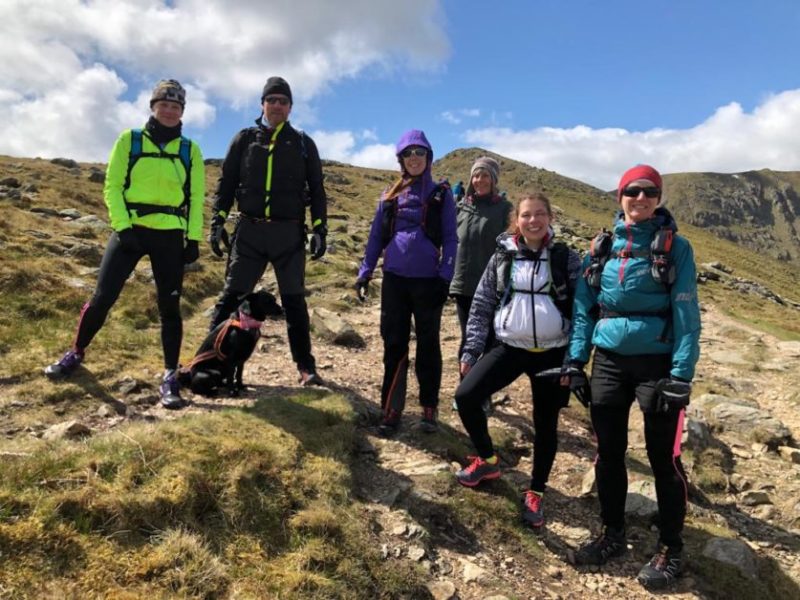 Karen Cameron gives us a taste of the C&C Fell Runners trip to the Lake District, May 4&5 2019

After leaving Cambridge later the previous evening and an overnight stop in Leeds, I drew up to the campsite at Thirlspot Farm on the Saturday morning of the May Bank Holiday to join eight fellow C&C members for our first day of fell running. The morning sun had melted the ice off their tents by then.

Our first venture into the hills took us up high between Thirlmere and Ullswater, twice passing the 950m summit of Helvellyn and taking in Striding and Swirral Edges in between. Our pace was easy going and we took time for breaks at lunchtime and along the way for snacks and photos. Total elevation gain was around 1650m and we were out a good seven hours. A hearty meal, some beer & good conversation at the Kings Head set us up for Saturday night under canvas; this time with temperatures remaining above zero.

Our Sunday route allowed us rather more running that the previous day. Starting from a car park northeast of Threlkeld on the A66, we ran the best part of a long gradual climb to Sharp Edge between Bannerdale and Scales Fell. A clamber up what this month’s Trail Hikes calls England’s most daring scramble made for an adrenaline high at the 845m summit. This helped drive a chase down over Mungrisdale Common and trot round Blencathra and Blease Fell before we rolled into Threlkeld for more great food, drinks and chat at the Community Hall Café.

This was my first venture out with fellow fell running enthusiasts from the lowlands of Cambridge and it certainly won’t be the last. I think that most of us came away hosting the seeds of inspiration to take up the Billy Bland Challenge as a team sometime in the future and what better reason than a goal like that to plan similar adventures in future.

Is anybody interested in having a go at the Three Peaks in the Yorkshire dales sometime soon? If so, join up to the Fell Runners group at https://www.facebook.com/groups/671800742966883/?ref=bookmarks, or email neville@highfieldhouse.org.