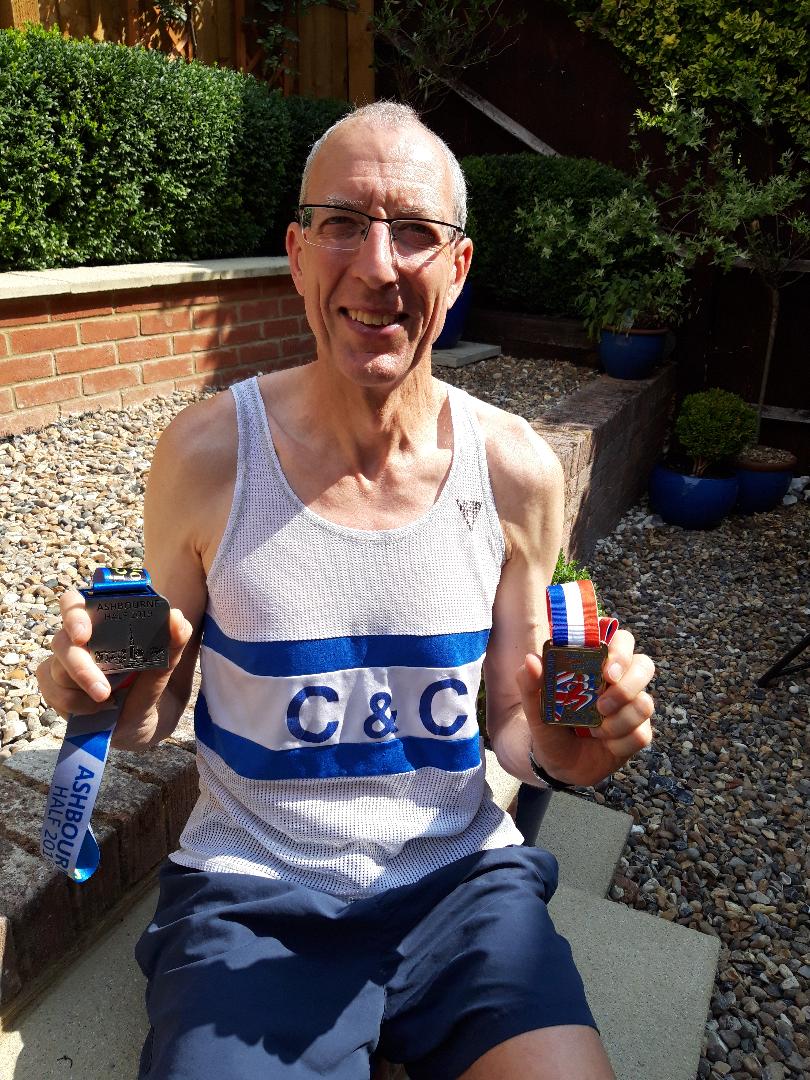 The great thing about C&C is it’s diversity and inclusivity. There really is an event or discipline for any ability and age group to participate in.

One of our Masters athletes, Peter Thompson recently competed in the  British Half Marathon Championships. Here is Peter’s account of his experience as a Masters competitor.

“For the older runner British Masters races are absolutely brilliant! Train as hard as you like, age does catch up with you, and you simply can’t run as fast as you used to be able to in your younger days. So races where you can still be competitive against runners within your own age group are great! They are also excellent opportunities to meet up with old friends and rivals that you really may only see at these events.

I recently ran in the British Masters Half Marathon Championships which this year were held in Ashbourne, Derbyshire. The venue ensured a tough and hilly course, but also a very scenic one.

I hadn’t really trained for a half marathon, I had planned mainly 10k’s and 5 k’s, for my race schedule, and only entered the half on the closing day of entries. My change of heart was due to a couple of things: (1) I would be in the area anyway as I was going to a family party there the day before, and (2) a final check of the entry list, and Power of 10, gave me hope that there was a chance of success.

My longest training run in the previous 6 months was only 11.5 miles, but I was running around 40 miles per week in training, so overall I thought that I would be able to cope with the distance. It was important to start off steadily though…..

So to the morning of the race, and it was warm, though not too hot. In these races you wear a little number on the back of your vest indicating your age group, so when lining up at the start I was checking everyone’s back for the M60 mark! I picked out and recognised the chap who I thought would be my nearest rival, he was lining up behind me. So we set off…..straight uphill! I was leading my category for the first mile when my rival came alongside me, then pushed ahead! The thought went through my mind about chasing him, but experience told me not to; I was happy with my pace, there were lots of hills ahead, it was warm, and there was a long way to go yet!

My rival, from the Liverpool area, pressed on to maybe 100 or more metres ahead, but he never went out of sight. Then there came the point where I realised that he wasn’t getting any further ahead, and this point was quickly followed by the realisation that I may just be slowing closing him down. It was a good feeling, and at around the halfway point, going uphill, I passed him! I never I look back, but I just hoped that the gap between us would get bigger! At around the 9 – 10 mile mark there was a turn-around point – a long stretch where we ran out to a cone, went round it, and came back. This gave me the chance to see how big the gap was, and, well, it was a decent gap, but definitely not long enough that I could relax. And he waved at me and we passed each other! So I pushed on as much as I could, the last mile was certainly hard going, but in the end I won the 60-65 age group gold medal by 63 seconds. My time was 1:33. It had been my first half marathon for about 5 years, and it had been a really hilly one, so I was satisfied with my time, even though I have run 23 minutes quicker than that when I was younger! The most important thing was that I had done what I came to do, and it had been a great race!

In the open field I was 46th overall out of 362 finishers.

I was delighted to win the medal for C&C as a club as well! It is brilliant to see how well our club’s younger athletes do, the times they are running, and the amazing successes that they achieve, but it’s good to have a thriving Masters section as well!

Well done to all of the people who keep this brilliant club going with all the hard work that you put-in! Running is often the easy part!”

Congratulations to Peter on his amazing achievement.